It has been a while since I got back from the trip to China, our farm life continued and easier during the off season.

When I just got back from my trip, Terry was pulling suckers, Cal and I worked with him a couple of days to finish the job. Last month we threw a round of fertilizer, Cal spread a round of Botanic Guard, this week Terry and I just finished another round of pulling suckers.

If we don’t have any farm works to do, I had to find something else to do around the house, which is not very hard if I’m in the mood.

One afternoon, I had Cal to help me pick Surinam cherry to make jam. We made some before, it tasted very good. This time there weren’t a lot, I washed the cherry and cut them open to take the seed out one by one. It took some time, but I enjoyed the processing moment. Terry told me, I need use 50% fruit and 50% sugar to make jam. So I weight the cherry, it was about 6 pounds. When I weight the sugar, the amount of sugar scared me, I changed the recipe, just used about 5 pounds. It didn’t take very long time to cook, Terry helped to stir the cooking pot 40 minutes, I had a break. The jam came out very good, with less sugar, it kept the peppery flavor and a little sour taste. We kept two jars and gave the rest away.

Another morning, I didn’t have any plan for the day, but when I saw the ripe bananas in our garage, I decided to dry some banana. Terry bought a fruit dehydrator for my birthday last year, we only used once to dry some macadamia nut. Two days later we had a gallon jar of dried banana, very sweet. 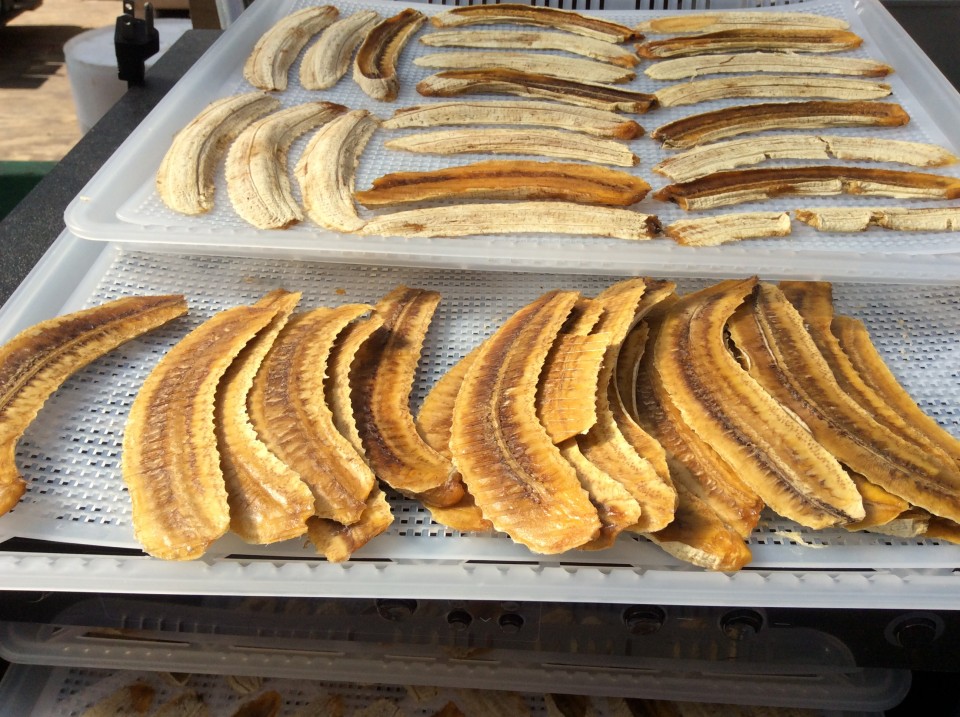 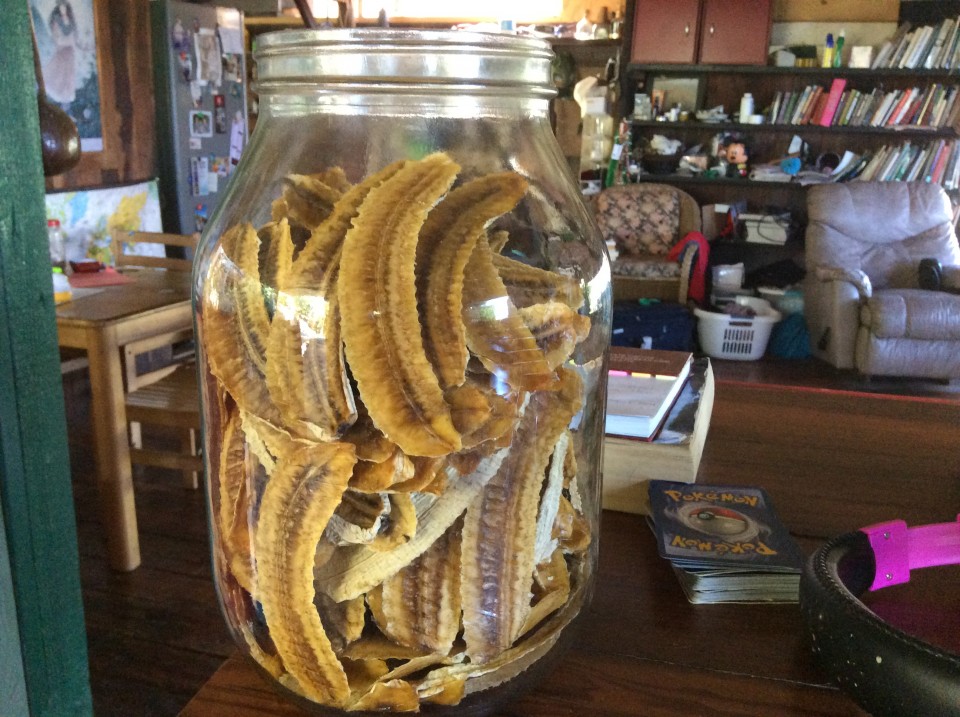 With more time in my hand, I had my morning walk on Sonny’s school day. When Terry drove Sonny to school, I ride with them and got off at the bottom of our road, then walked up the hill. It usually takes half hour, sometimes it takes longer if I had camera with me.

One the road side, there is a house with a Jack-fruit tree in the yard, it loaded with fruits, ripe fruit smells so good. We have Jack-fruit in my home town too, I remember the taste, it has been many years since I had some last time. But it seems nobody care about the fruit, ripe ones fell on the ground and just rot there. So one morning I talked to Dylan who is living there, asked him, could I have one Jack-fruit. He told me he only eat one a year, he was very happy to give me some. He gave Terry two the first time, but they turn out not ripe enough. Second time it was a huge one, at least weighed 30 pounds, just fell from tree and had sweet ripe smell.

I was happy to taste this fruit again, and Cal had a chance to try new fruit. Later on, Dylan told me to get some more when there was a ripe one. I thanked him and told him that one Jack-fruit a year was enough to me too. We are so lucky and so rich with abundant food here, often we see fruit ripe on the tree, rot on the ground. Right now it’s mango season, so many mango on the ground, nobody cares. On my morning walk, I picked up some mango from road side, I love mango. 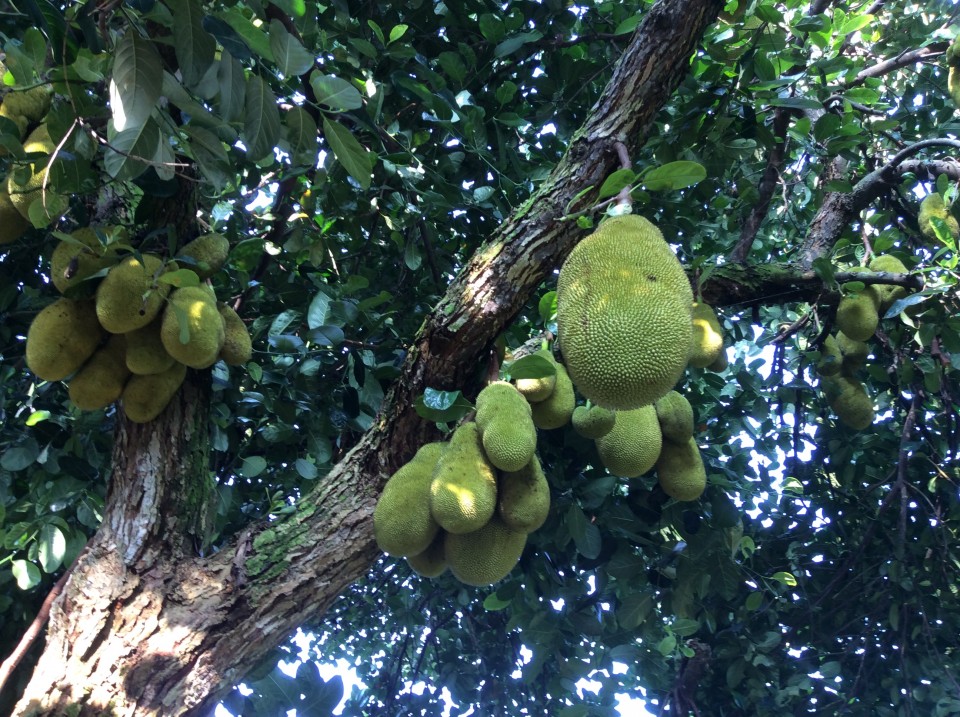 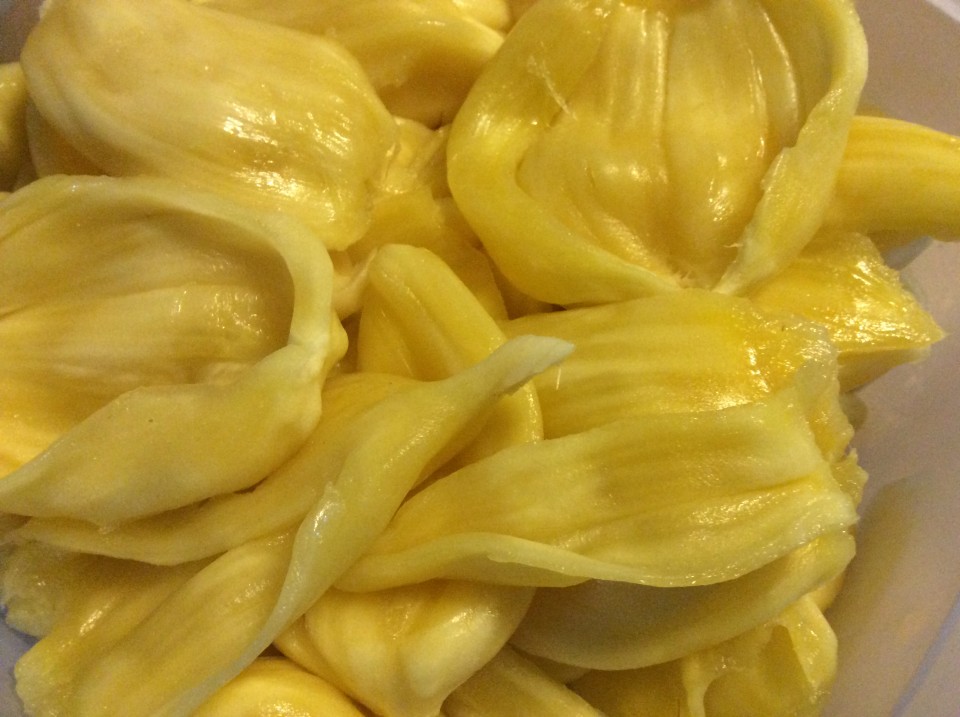 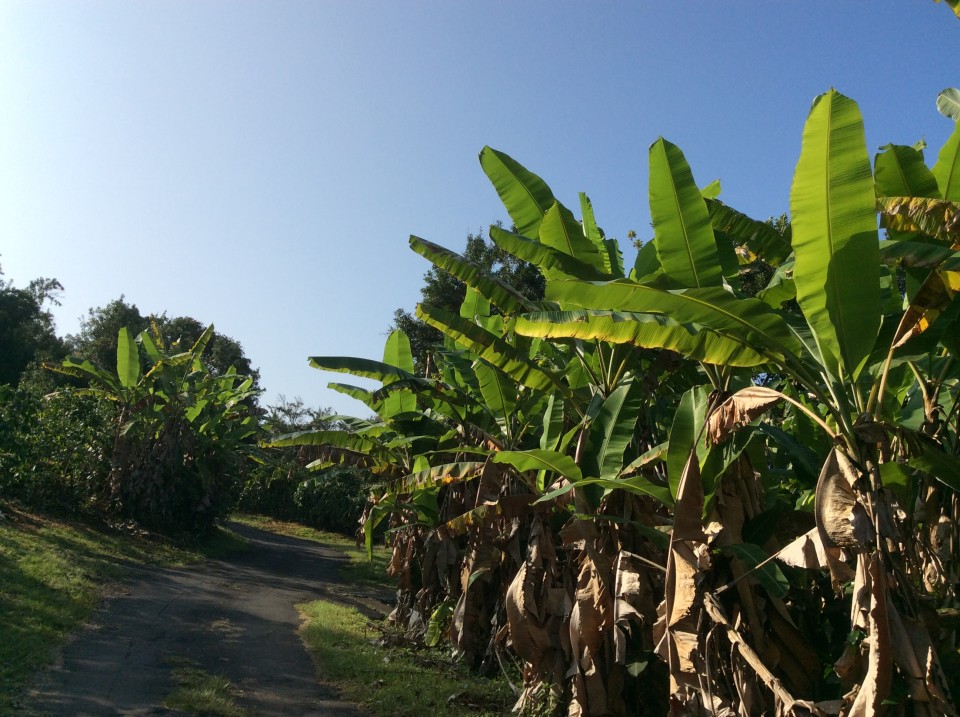 Banana trees on our road

Labor Day was on Monday, no school, no work. Sonny finished his homework, freed to spend his time watch video or play game on his computer; Terry enjoyed his time reading, napping, smoking, watch TV; I spent my time to make dumplings.

After our breakfast, I decided to make some dumplings, Sonny asked for home make dumpling several times since I got back from my trip, and I was in the mood at that moment. I mixed the dough, then went to my garden to cut garlic chives. After I picked through the chives, got about 4 pounds, washed and cut, mixed with 2 pounds of ground pork and other seasonings as dumpling filling. I like to make my own dumpling skin, it seems stronger than the one from supermarket, but takes much longer time.

I downloaded a lot of Chinese songs when I was in China. I had the music player by my side when I was making dumpling, I let my mind following the music into the world which was described by the lyric, sometimes the song brought back some old memories and old friends into my mind. Making dumpling with relaxation.

At 1:00pm, I hadn’t finished the job. I stopped and made a quick lunch, some fresh made dumplings. Sonny had ten dumplings, they were pretty big size, he loves it and told me I was a good cook. I hope my dumpling will become a special dish in his life, a dish with mom’s special flavor, only can get from me. After lunch, I spent another hour to finish the job, made about 120 dumplings, then frozen and bagged them up. I used them for breakfast most times, it’s easy and quick. 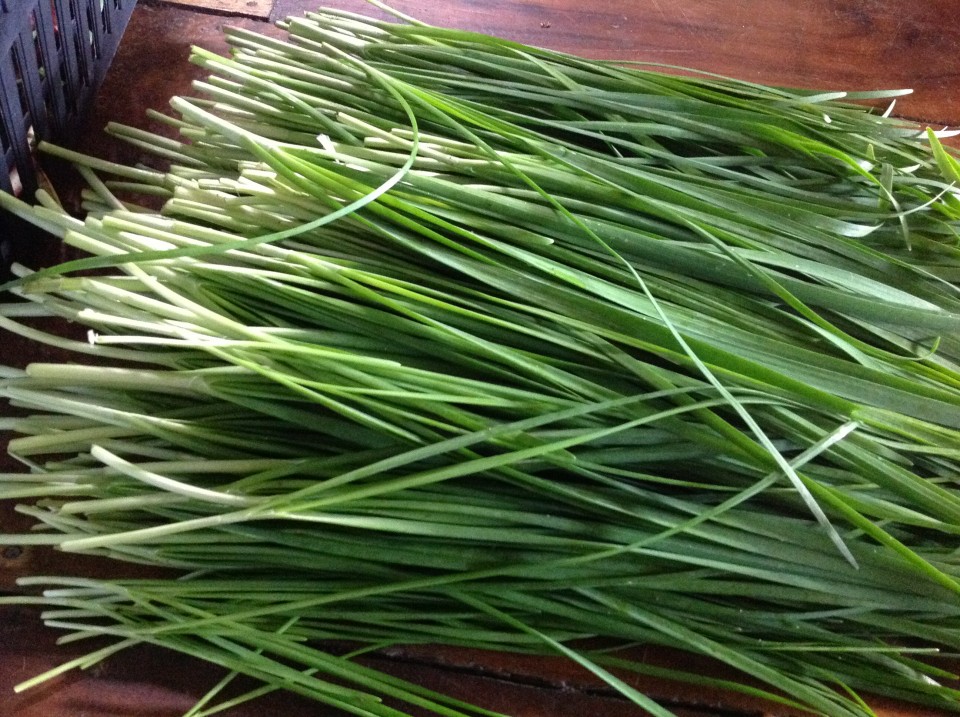 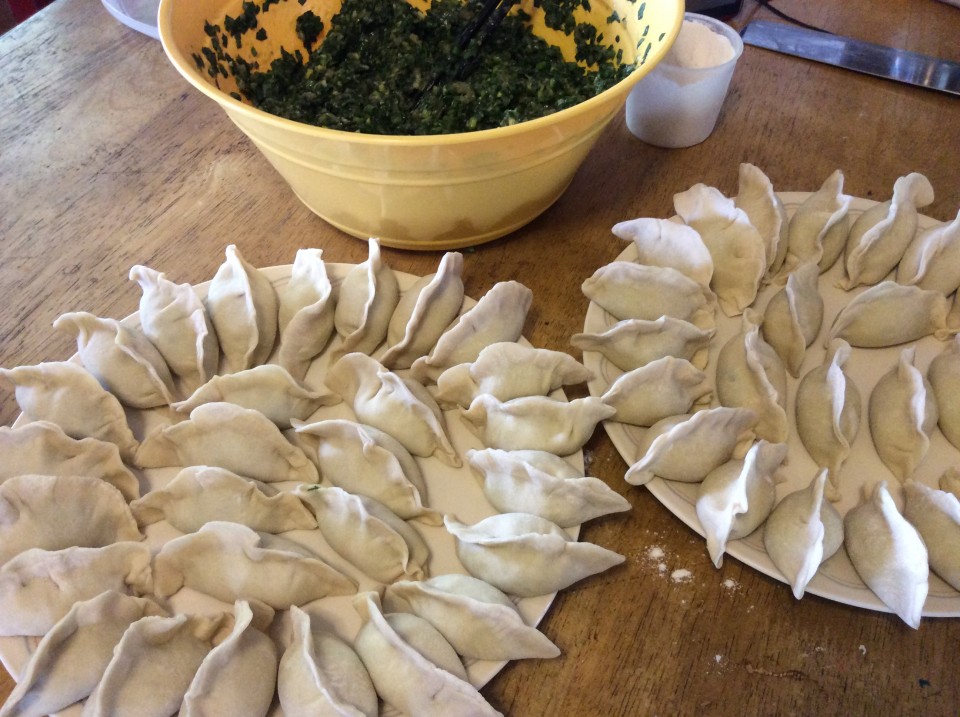 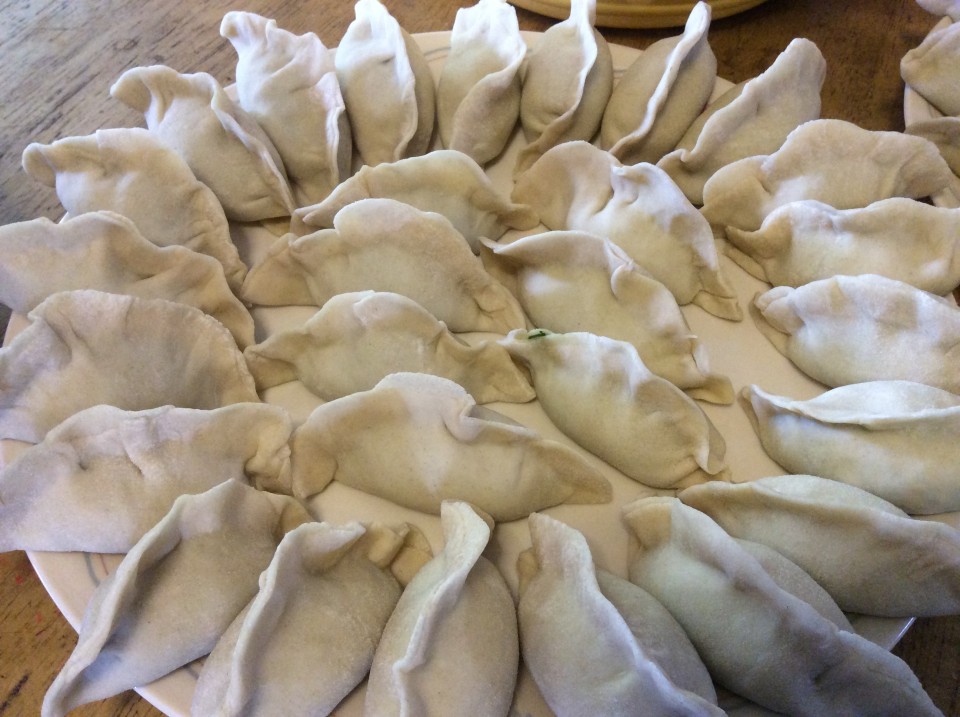 I’m a person, very easy to get content and be happy. But that day, I was very very very happy, not excited happiness, but peaceful happiness, so content and comfortable. I have everything I want in my life, a happy family with a loving husband and a child. At that moment, my happiness just like wine, kept over flowing from its glass, it was one of the happiest moment in my life. I expressed my feeling to Terry, thanked him to choose this wonderful life style and build this place for me and Sonny to join him. A simple life is a good life to someone like us.