Rain falls gentely almost every day, in the afternoon or night time. We are in raining season again.

Terry works on the new farm most time, I work on this farm. Sonny helped to  throw fertilizer last time, he helped with this job again last week.

He is as tall as me now, can carry some weight, and likes to show me his strength. I let him taking his own speed to do the job, I value more of his trying to help than the amount of fertilizer he threw. First morning, he did three bags, I did ten bags. He said to me,” Mom, you are awesome, you are so fast.” I told him that I had more practice. Second morning, we finished the job, but had four bags left; that means we didn’t use enough for the farm. Third morning, I used up those four bags at the area where Sonny did the job, it was his off day from farm work.

I started my Perennial peanut ground cover project last year. This plants grow low, don’t climbing on trees, build nitrogen in the soil, sounds great to me for our farm. I started on one acre flat area with more soil. Digging a small hole for one seed, about two feet apart. It took me some time to plant the whole area, Sonny helped me at weekend. But only 20% of seeds came through, weeds grew faster than peanut, at the end, not many peanuts are doing well.

After coffee season which is dry season, most weeds died down, only the peanut patches were healthy green. Finally I got some time to attend it, hand weeded those patches. I took these two photo at below this March. 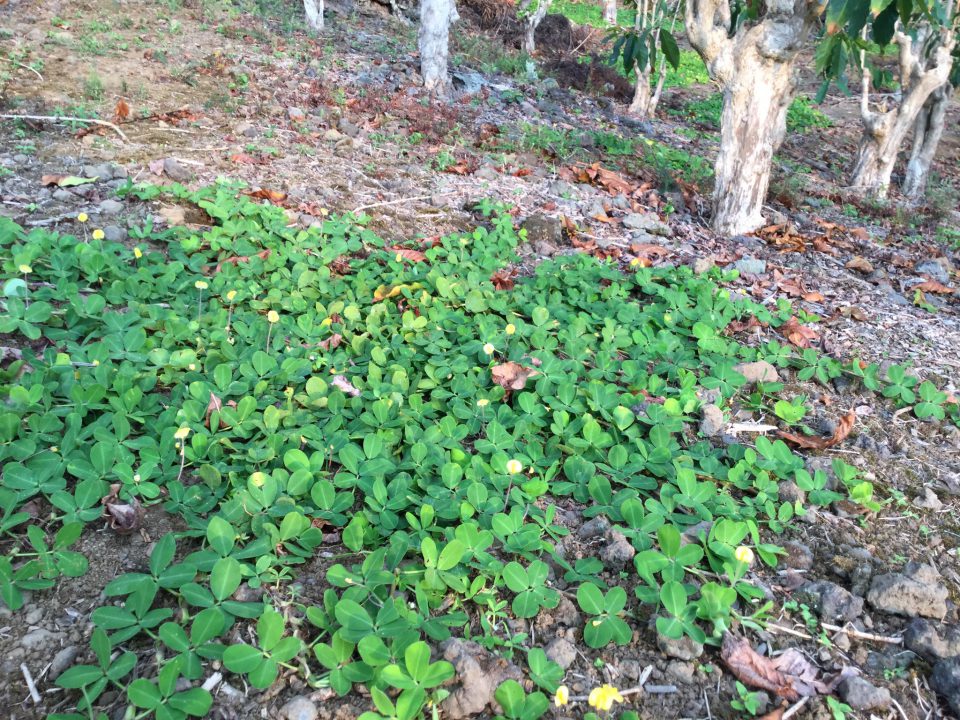 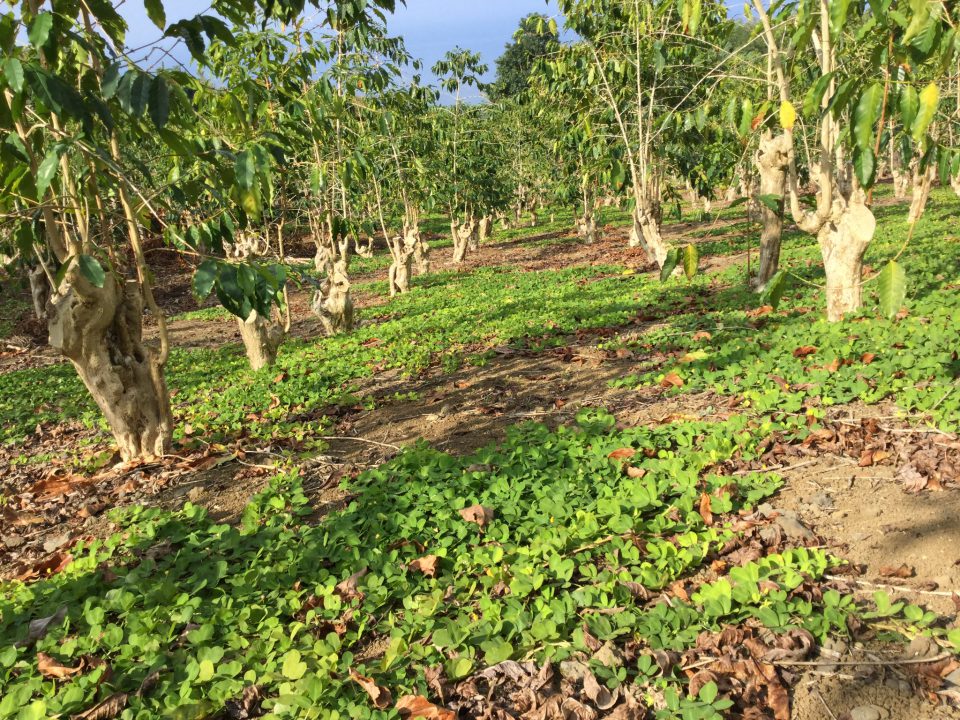 Slowly we got some rain, these peanut patches took off, it spread out fast and wide. At the same time, weeds grew again, I tried to keep up with weeding this time. I used a sickle to dig out clump root of weeds, pull out young weeds, throw weeds into a big bucket, then dump the weed underneath banana trees. Often I worked 4 or 5 hours in the morning, 2 or 3 hours more at late afternoon if it’s not raining. I spent so much time squatting or kneeling when I was weeding, my knees and back started getting ache. Now I understand, why a person complain about pain of joints when they get older. I have a jar of  home made comfrey salve from Joni, some nights I rub a little on pain area before go to bed, next morning I feel much better.

It’s a simple job, but require a lot of time. I’m enjoy doing it, when I see the peanut cover more and more ground, image the land and coffee trees getting happier, it gives me a big satisfaction. Half acre of my first experiment area look like the three photo at below now. 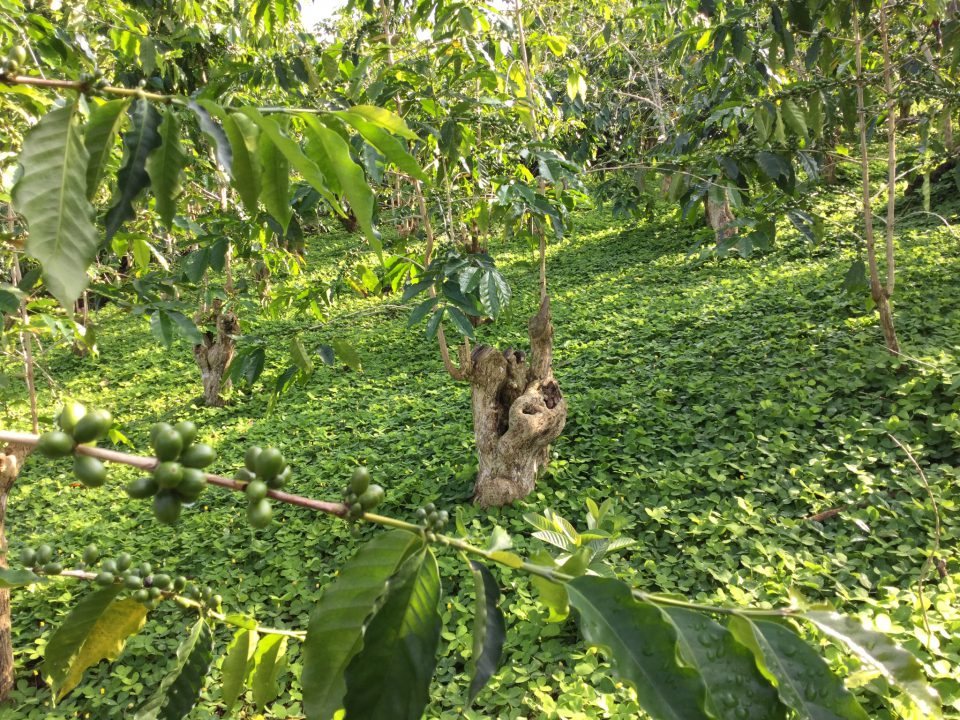 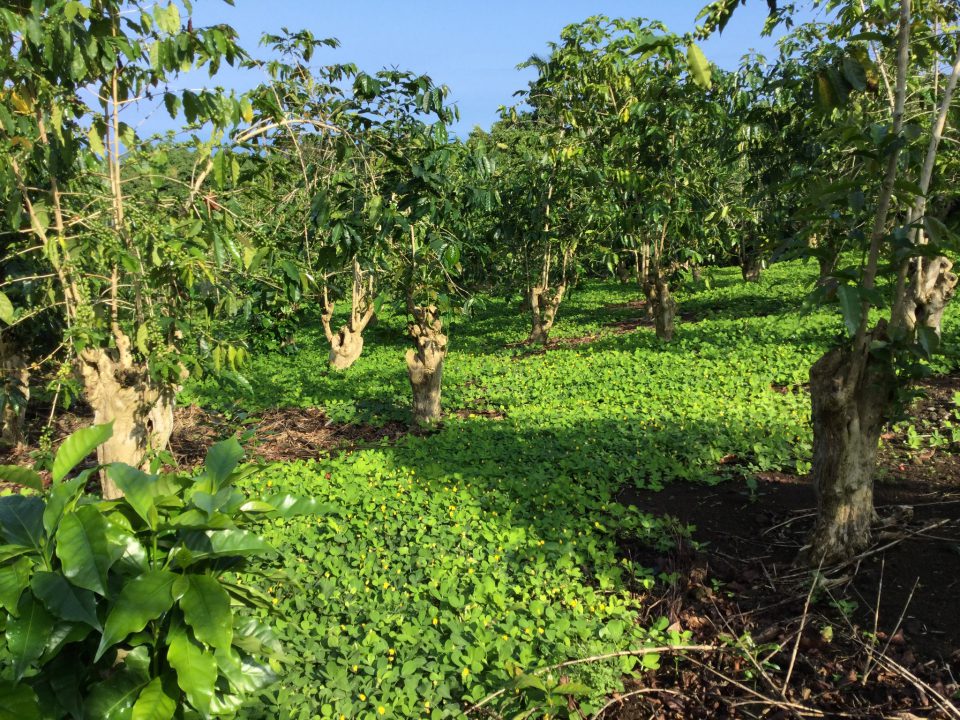 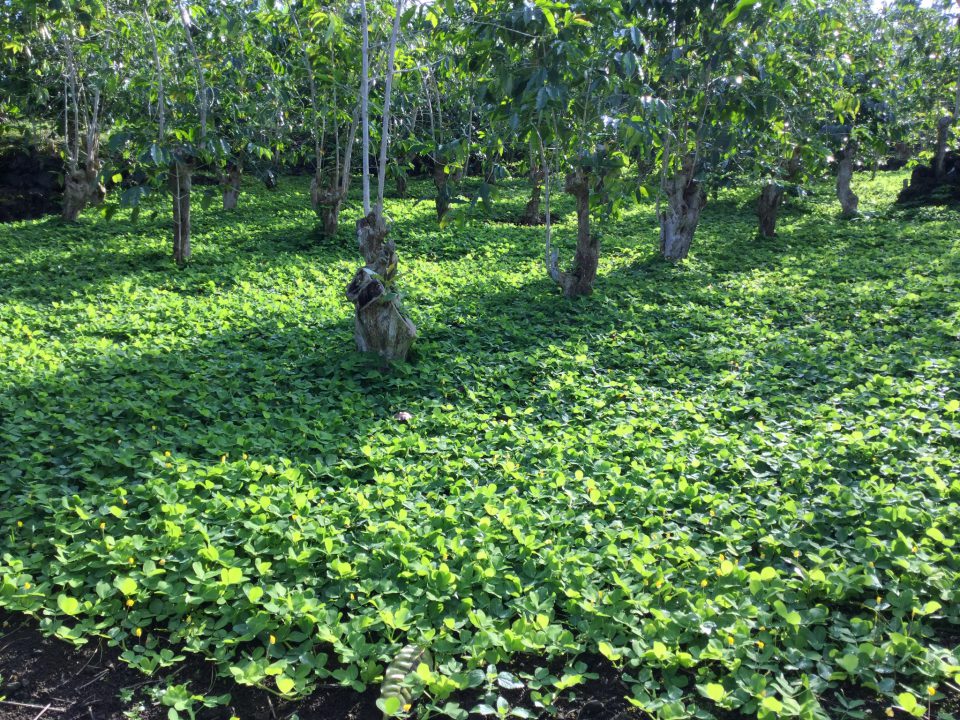 Other half of acre look  like the picture below. 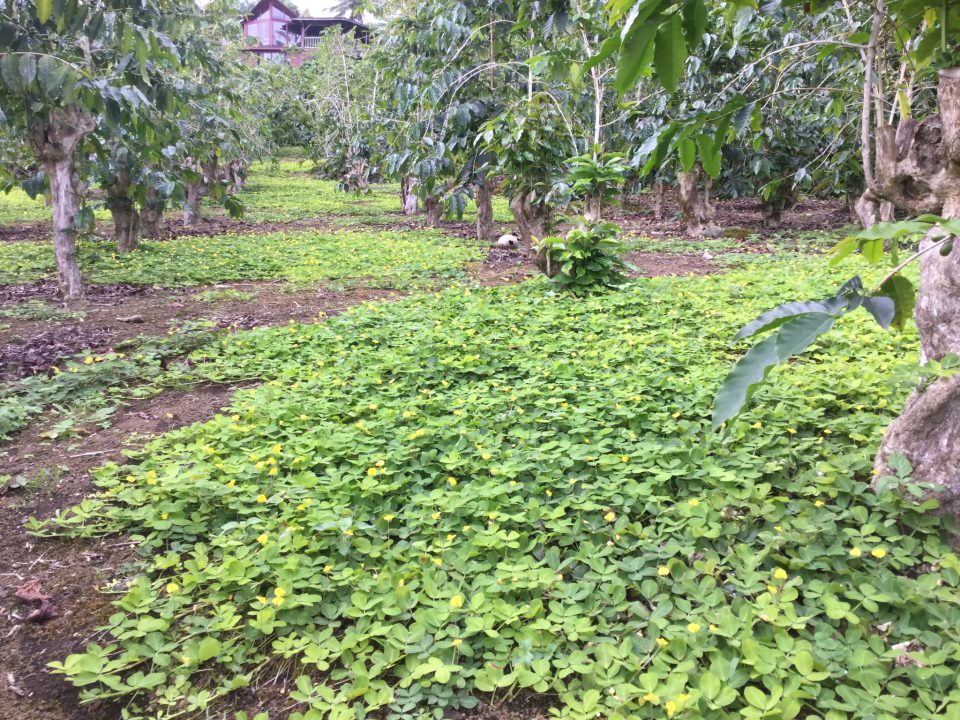 I had Sonny helped me to plant more peanut on empty spots between patches this March, it grow very well now. 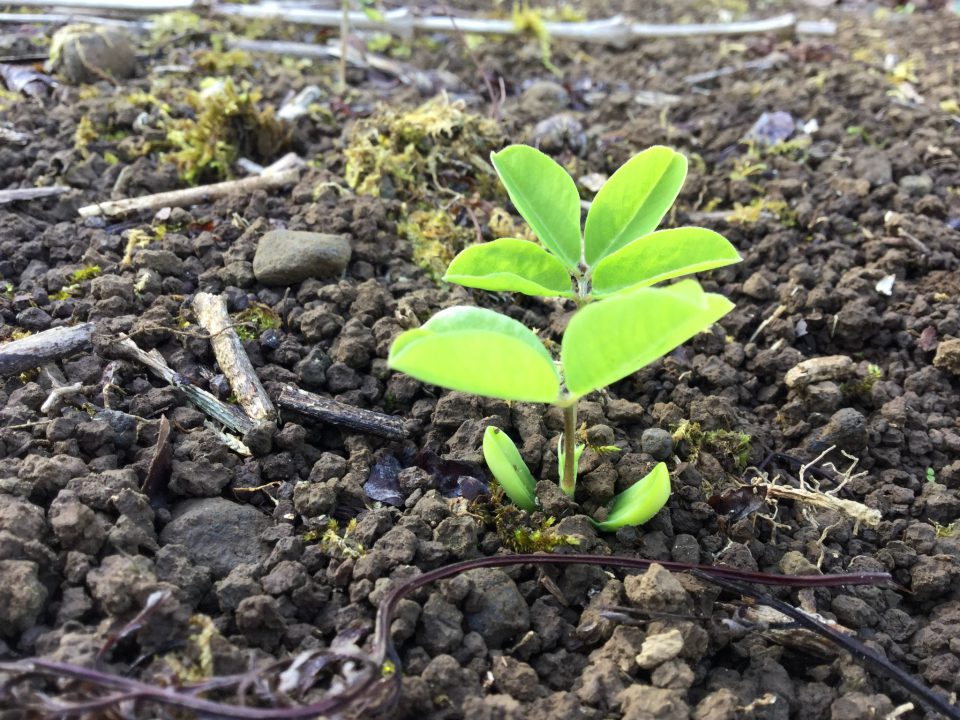 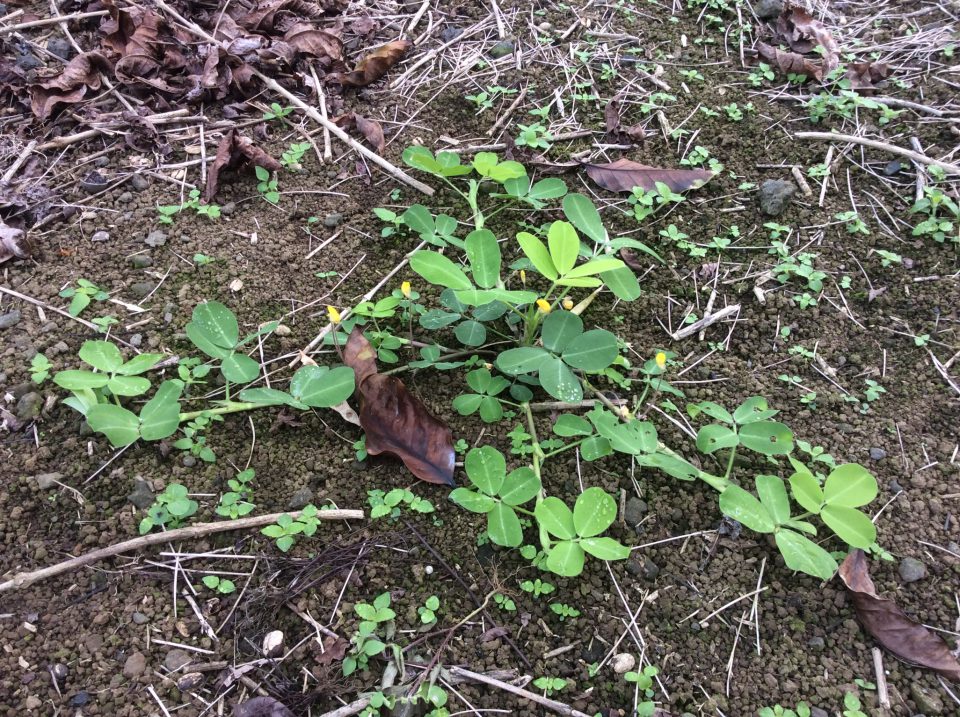 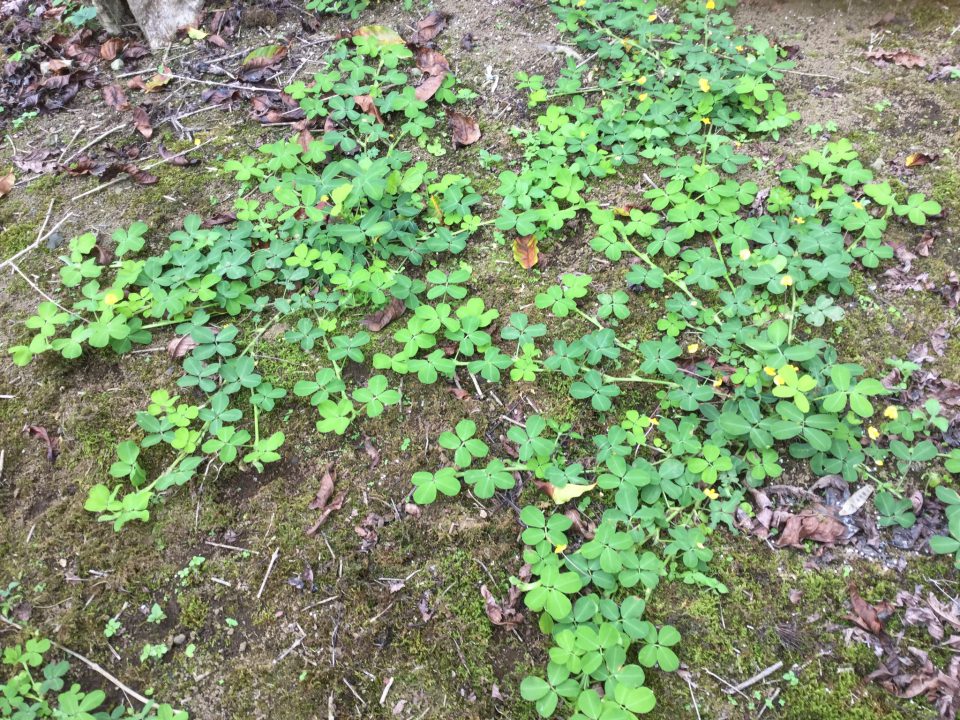 The plants have yellow flower, it’s edible, has light sweet taste, I tasted it. The plants flower year-around, bees were busy and happy, I could hear their buzz when I was pulling weeds. 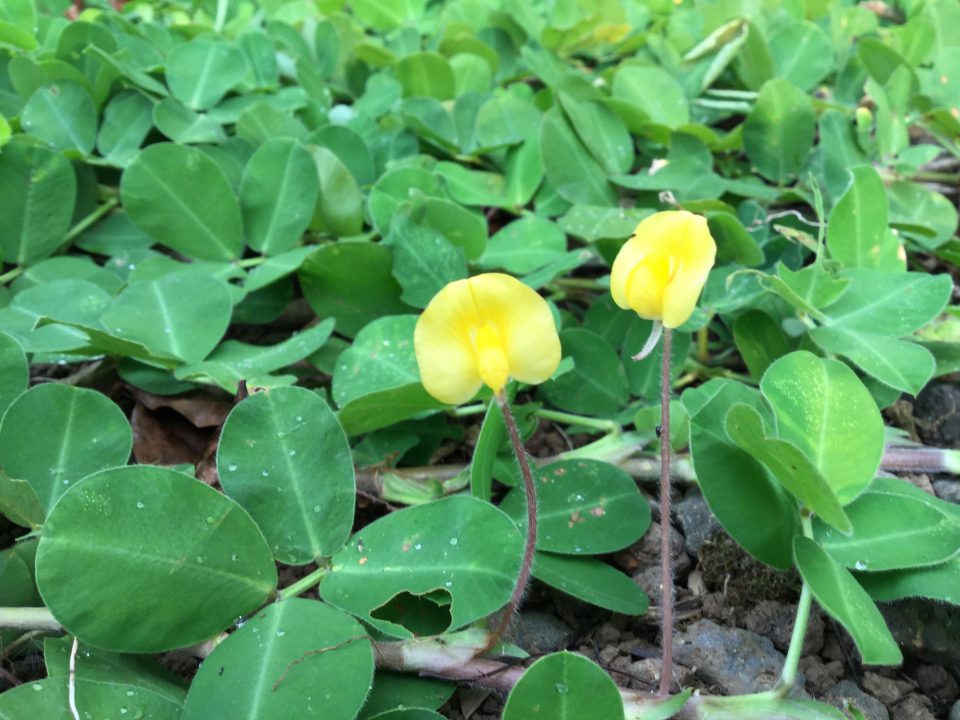 Planting Perennial peanut as ground cover on our farm was my idea, my project; Terry didn’t involve, he worked very hard on our new farm, six days a week. Two months ago, he spent two mornings pulling weeds with me, saw how well the plants growing.

He said to me, ” at beginning, I worried how determined are you with your project, are you going to be persistent with it? Now I think you did great, it looks so nice. I’m so proud of you.”

I was surprise to hear he said so, because I didn’t catch any hint of his doubt, he didn’t express any negative opinion about it in this whole time. Instead, he gave me a little encourage, let me do it all in my way by myself. I’m very happy to hear his complement, but the strongest feeling it give me is gratitude, for the way he treated me, let me try to carry out my idea by myself. There is the presence of his love, love with wisdom behind the whole thing. I’ll remember this, will try my best to love him and Sonny in the same way in the future.

My goal is planting this ground cover on rest of farm. Terry suggested planting smaller area at a time, so I can keep up weeding these areas. It might take me several years to complete this project, but I think I can do it.